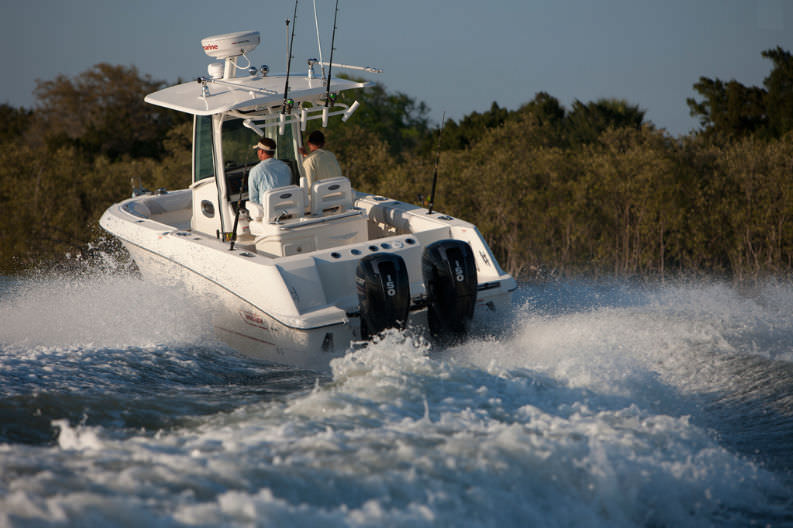 Once again, Mercury Marine has stamped its leadership in marine engine technology with the release of its new 150 hp FourStroke EFI outboard engine.

With its breakthrough design, this 150 hp FourStroke offers unprecedented durability under all conditions and delivers superb fuel efficiency and tremendous performance.

“We listened to what boaters were asking for and then set out to build the ultimate 150 hp FourStroke outboard,” said Mark Schwabero, president of Mercury Marine. “The finished product is an engine that is incredibly durable – more durable, in fact, than any other 150 FourStroke ever built – but is more compact than the less-durable engines of our competition. It delivers great fuel efficiency and tremendous performance.

“I believe we accomplished exactly what we aimed for; this engine is a perfect addition to our wide breadth of four-stroke engines.”

It boasts 3.0litre, 4cylinder in-line configuration that easily creates superior power for single or twin applications. In fact, it has more displacement than any other 150hp FourStroke engine, yet it delivers fuel efficiency at cruising speed that no other engine can beat.

At just 206kgs, Mercury’s new outboard is by far the most compact FourStroke 150 hp outboard in the world. In fact, it’s just 11kgs heavier than Mercury’s popular OptiMax 150 direct-injected outboard.

This means it’s the perfect option for owners wanting to repower their boats, especially older models with transoms not designed to accommodate the weight of conventional FourStrokes.

Add all this together and it’s far and away the best value for money 150 hp FourStroke on the market.

Amazingly, the Mercury 150 FourStroke has almost 20% fewer parts than a Yamaha F150, proving that better technology can deliver durability and performance while simultaneously reducing package size and weight.

The new 150 FourStroke is designed, built and tested to be one of most reliable and durable engines in the world. It will start and run consistently and last longer on any body of water anywhere in the world, having proved itself in severe field testing in conditions as varied as cold 20-foot saltwater swells off Canada, commercial fishing in the warm waters of the Bahamas and the unprotected seas around Guadeloupe in the French West Indies.

The new engine also provides a massive torque curve which ensures that even the heaviest boats will plane quickly.

“The new Mercury 150 is class-leading in every respect but we particularly focused our attention on being a stand-out in the areas that our customers told us really matter – quality and reliability, smooth operation, a great torque curve, low weight and compact size, plus excellent fuel economy,” said David Foulkes, vice president of engineering at Mercury.

4.9-inch Gearcase: Similar to the powerhead, the 4.9-inch gearcase housing meets durability requirements for 300 hp-class outboards though it needs to manage just 150 hp – an illustration of why this is the most durable 150 hp outboard on the planet.

Rig it  and forget it:  The 150 FourStroke is the world’s easiest 150 hp outboard to rig, with standard mechanical cables, dual cable or hydraulic steering compatibility, optional power steering on dual-engine setups, and the ability to run on either standard analog or full SmartCraft instrumentation straight from the factory. All connections under the cowl for throttle and shift cables, data harnesses, etc., are easily located and accessed for quick, intuitive, hassle-free rigging. It’s also compatible with Mercury’s innovative Big Tiller system.

Repowering is also quick and easy. The new 150 will connect to any steering, Mercury rigging or instrumentation currently in the boat, or whatever the consumer wants to upgrade in the dash or console.

60 amp alternator: The 150 FourStroke’s marine-hardened alternator is automotive-style.  This system – which is significantly lighter than our competitors’ engines – is fully regulated and supplies current only on demand; therefore, when the system senses the battery voltage has dropped below 14.2 volts, the alternator will engage and re-charge the battery. The 150 FourStroke’s automotive-style alternator develops more than 67% of its 60 amp output at only 1,000 RPM. When the alternator is not charging, it “free-spins”, which minimises the power drain on the engine and unnecessary heat build-up.

SmartStart: Instead of turning the ignition key to the “start” position and holding it until the engine starts, the operator simply turns the key and immediately releases it. SmartStart will automatically continue turning the engine until it starts. This feature is also available with the accessory push button start/stop panels. With the new 150 FourStroke, it is impossible to grind the starter gear or engage the starter motor in the event the operator attempts to start the engine while it is already running.

Warranty: Given the incredible durability of the new 150 hp EFI FourStroke, it comes with both Mercury’s standard 3+2=5 Year fully transferable non-declining engine warranty plus its industry-leading 3 Year Corrosion Warranty.